The Art of the Matter 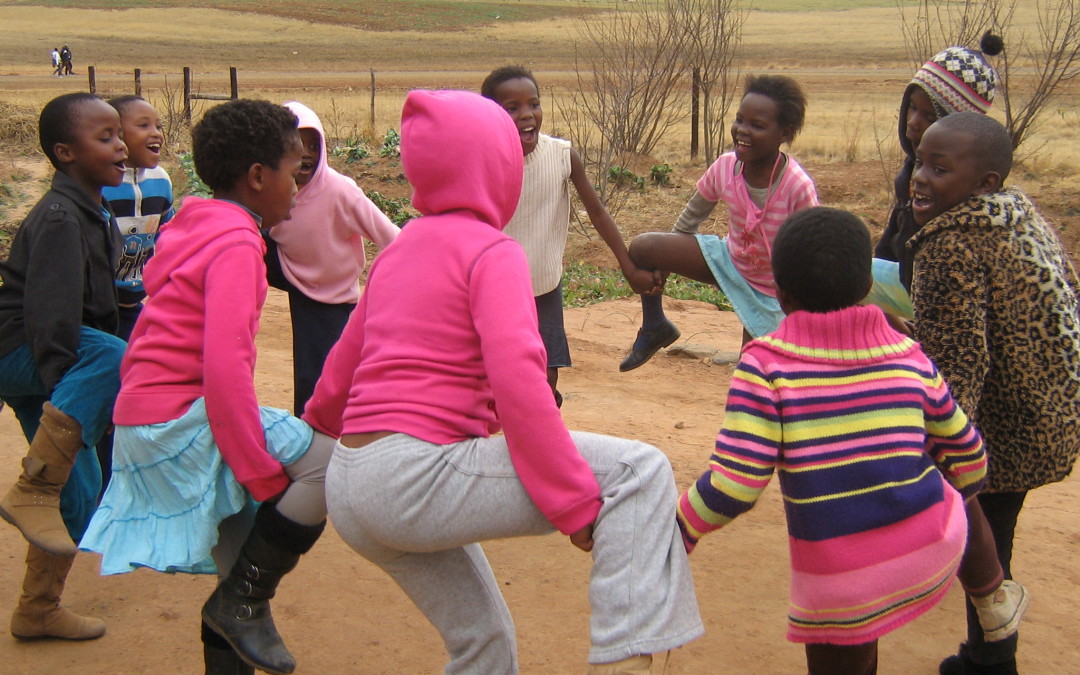 Each winter Mandi  Sandenbergh travels out to our Eastern Cape drop-in centres to run her fantastic ‘Art on the Go’ workshops, keeping scores of children busy for many happy hours expressing themselves through painting, clay modelling and play.  This year was no exception, with many lovely and fun exercises.  We caught up with Mandi upon her return to Cape Town and asked her to tell us more about what had gone on.

How would you say it went this year?  Because you do this every year, don’t you?

Mandi:  Yes.  This is my fourth visit.  It was actually magic.  Our theme was love and friendship and Ubuntu, inspired by the fact that Nelson Mandela is in his space.  We had quite a lot of fun with Africa’s, which we tried to do as a happy place.  Africa as a feeling, loving, wonderful place. 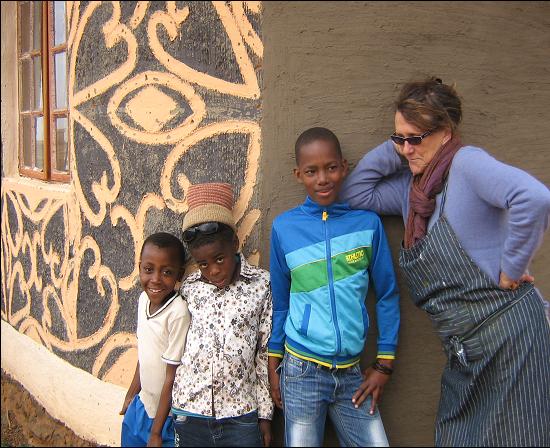 And the Africa’s in particular, you say that some of the children didn’t recognise the outline?

Mandi:  We had a long conversation over whether Africa first was a continent or a province or a country.  And then Sindie, who heads up ASAP’s Eastern Cape office in Matatiele, explained that it was in fact a continent, and they talked about the size of it, how many different countries, who lives on it, where the food grows, doesn’t grow, deserts, all of that sort of stuff.  And then we just got into the drawing and filling in of them, and creating a happy Africa, with it as we would like to see the whole continent.  And these are the results. 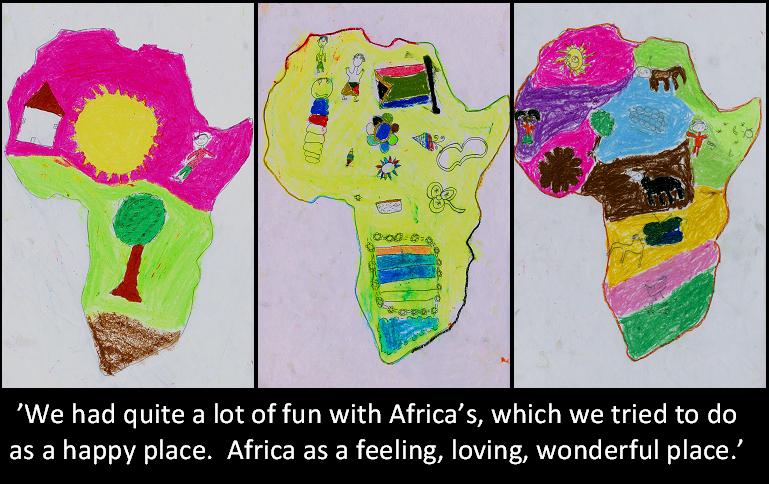 Mandi:  And then on the second day we used the clay, which for me was the best.  And the children absolutely loved it.  It was our first time to use clay.  So we started off just pushing the clay, and they felt the feeling of it, and the temperature changes and stuff like that with their eyes closed.  Some of them had cheated, it was really funny.  So they had created a real thing.   And then I made them open their eyes and look at the shape, and so they had to roll it up again.  So that was a nasty shock to the kids that had peeped, you know, and made their own creation.  So then they all rolled it back into a ball, and we made a pinch pot, which everyone took some time making.

Mandi:  And the whole idea of that was that you had this pot, where you could keep your happy thoughts, and good memories, and everything, into the little pot.  And the rest of the day was just creating what you liked with the clay in the theme of love and friendship.  And they put it onto two trays that we’d painted from the supermarket and stuff, and they could create a picture around that with the clay. 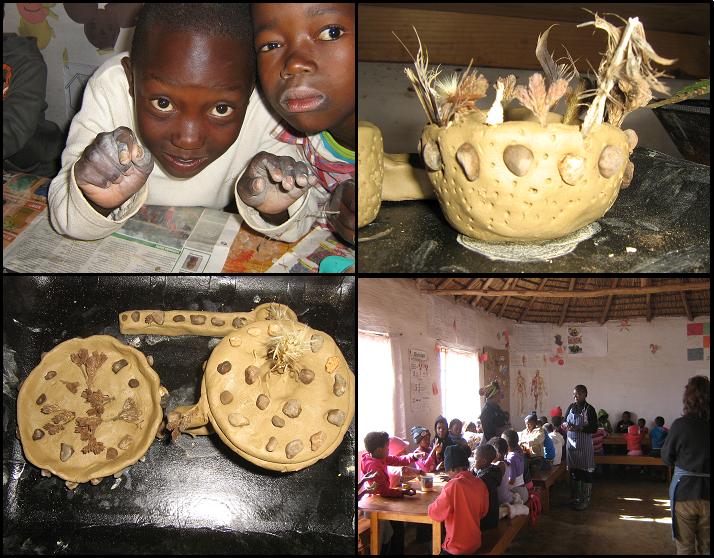 Some of the superb clay creations

Mandi: And then on day three we did the snapshot paintings using these canvas panels, and they created a picture of themselves with a friend or just two friends as if it was a snapshot.  And they loved that!  They had so much fun and there was laughing, and giggling over that.  And altogether, all three days in each centre was an amazing success, I think.

And you love this work obviously?

Mandi:  Yes, I love what happens for them.  And as I was saying, we picked up a lot of stuff out of three or four children, and almost every-time I could see that there was a problem with a child I said to Sindie, “Tell me about this child?” And there was always a story that needed looking into, in terms of who she was living with.  What was happening with the grandmother, or the Granny had left and gone to Joburg, or they were left alone with Grandpa, and one child was really acting out and was obviously feeling the loss of his Granny.  And nobody had picked this up until we said, “What’s the problem?”

Because it’s coming out of their imagination, their inner world, isn’t it?

Mandi:  Yes.  And you can see sometimes, well, how they react in the group, and also how they scribble stuff.  It comes up. 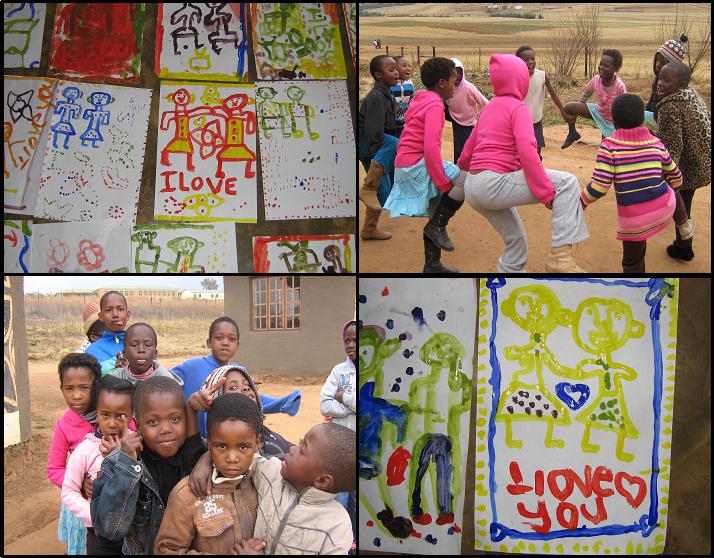 The art of fun and lasting friendship

How would you like to build on things in the future?  Because the process is growing and changing each year, isn’t it?

Mandi:  It’s growing, yes.  I’d like to take more time over it I guess.  I think it’s very difficult because coming from here all the way up there, time is never enough, it feels like for me.  And I would like to try and do smaller groups so that we do one group in the morning and another in the afternoon.  Something like that, so it becomes more workable, because it becomes quite chaotic.  And then I let go of a lot of stuff because I think it’s a holiday, and it’s fun, and that’s the key.  And I think that that is the key, because they do have a lot of fun.  I mean, one morning we did a laughter thing because we couldn’t go outside.  So to warm up we laughed.  We laughed like a donkey, and we laughed like a chicken, and each other, and we sort of made it how do you laugh, and you can pretend to laugh to get over problems, that sort of thing. 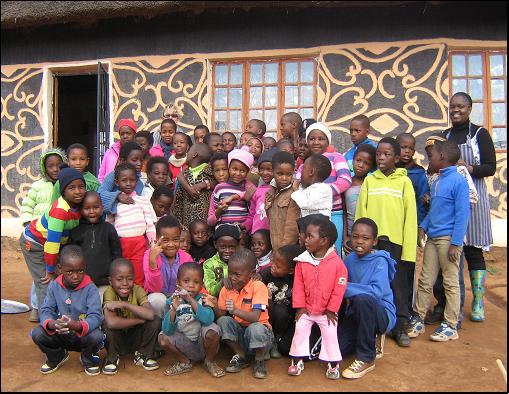 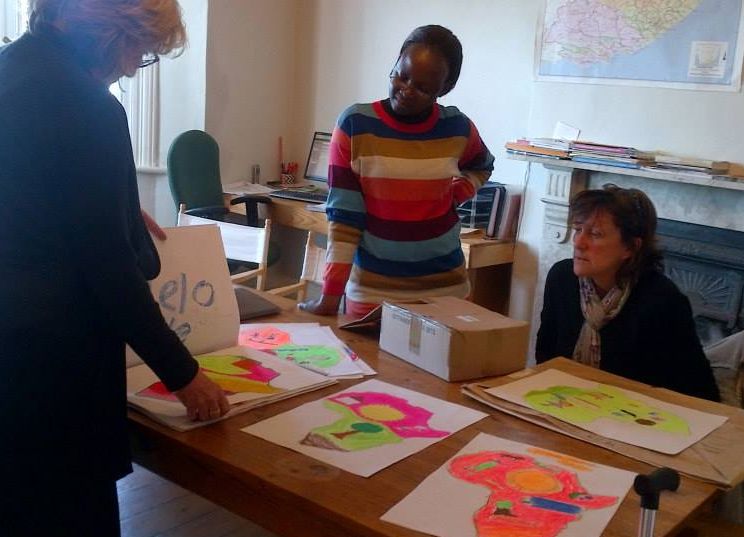 Back in Cape Town at the ASAP office.
Mandi, with Priscilla Highham (Left) and Linet Dube (Centre), look through some of the vibrant ‘Africa’s’.