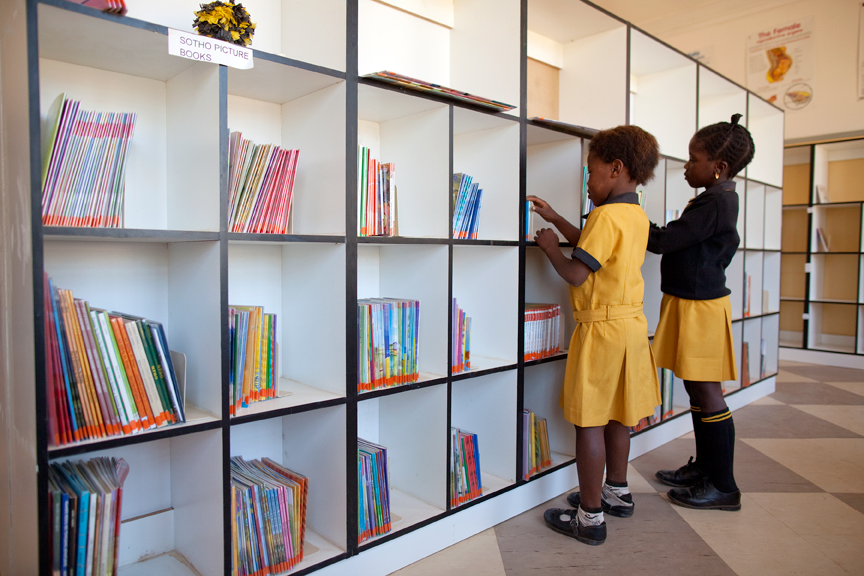 In partnership with the Ed Bradley Family Foundation, ASAP has installed two complete school libraries with 2000 brand new books each, bringing these children the life changing gift of literacy! Prior to his legendary career at CBS with 60 Minutes, Ed Bradley was an educator

Ed’s widow, Patricia Blanchet, who sits on the ASAP US Board, wanted to make a lasting legacy donation, so with matching funds from ASAP’s private donors, we were able to launch this new ASAP library initiative! Two schools were chosen to pilot this programme because of the numbers of orphans being supported by ASAP attending these schools; Maria Linden with 360 children in a rural village in the Drakensberg mountains, near Matatiele and St Georges with 800 children in Mt Frere, Eastern Cape. They were in dire need of a library and had no books. Now their libraries are stocked with books in both English and their respective local languages, fiction and non-fiction, aligned with the National curriculum.

Thanks to Linda Biddel, who as well as donating books, we were introduced to Room to Read (R2R) in South Africa. As a result, our librarians from both schools have now been included in the R2R three year library training programme. Anthony Zvarevashe from St. George’s said “The training was very informative and we saw our strengths and weakness. We are now changing and upgrading our libraries to be child friendly and to meet the international standards of Reading Rooms.”

Literacy among African children is a growing concern and 79% of South African public schools do not have libraries.

“The moment we persuade a child, any child, to cross that threshold into a library, we’ve changed their lives forever, and for the better. This is an enormous force for good.” Barack Obama