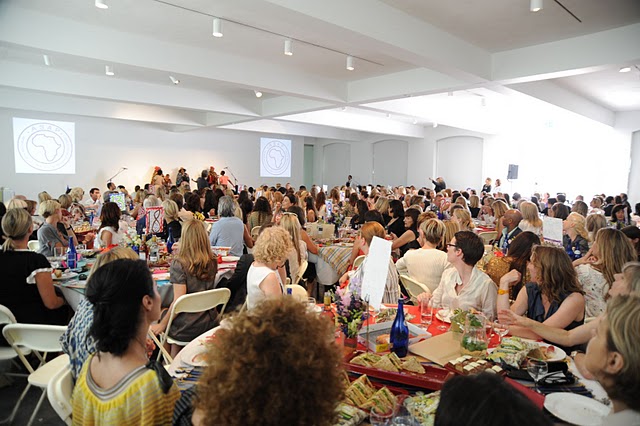 The 4th bi-annual 2010 ASAP Fundraiser was a huge success—huge being the operative word! Since our last fundraiser in 2008, attendance has doubled in size, and on June 23rd the UK Board of Advisors, donors and friends of ASAP gathered over 450 supporters for the event.

It was a memorable occasion for many of us, but most of all for our dear friends from Mamohau, one of the community based organizations we work with in the village of Masupha, South Africa. Three Mamohau women and five orphaned children were chosen to fly to England for the event. None of them had ever been on an airplane, and most of them had never even left the village of Masupha, just over the Lesotho border under the Drakensberg mountains. It was an unforgettable experience that I’m sure they will treasure—and gloat about—forever!

Wow! It was very nice in England. I was so amazed and I was not believing that I will ever go to a place called England. I would like to thank ASAP and those parents that we went with. Now we all have dignity. We went peacefully and we were happy and came back without anything happening to us. Thank you a lot!

It was the first time in my life to be in an aeroplane. I saw many things in London. We went to the circus and there we learnt many things. I thank ASAP for everything. VIVA ASAP VIVA!

Singing and dancing in front of Sudeley Castle.

Through their entire visit, we kept thinking, “How are they going to explain this to the kids back home?” How do you tell someone who’s never seen a plane what it’s like to fly thousands of miles across the globe? To be surrounded by people of every race and religion? To be driven to a castle and welcomed with open arms by Lady Ashcombe, one of ASAP’s dearest supporters and advisors. Needless to say, the kids warmed to castle living quite quickly, and in no time they had their shoes off and were kicking a soccer ball through the castle grounds and playing with loads of exciting toys, including a life-size electric jeep! There was swimming, painting, dancing, eating, and lots of awe and jaw-dropping fun.

The kids also got the finished Make-A-Plates they designed last year--they loved them!!

Surely they thought they’d seen everything, but the piece de resistance was the fundraiser, held at the Louise T Blouin gallery in London. Crammed tight with forty tables decked out in African kikois, the room was buzzing with energy and excitement for the cause. Patrons mingled, catching up with friends and acquaintances while munching on donated sushi and sandwiches. The Africans, decked out in their finest shwe-shwe, opted for sandwiches and popcorn over sushi as they let the people and surroundings soak in.

Everyone in England was quiet and friendly and ever smiling. We were looking good in our African attire wearing shwe-shwe outfits where we had lunch in a lovely place. Oh this was a real celebration and our children danced our traditional dance and we sang on the stage, “ASAP open the door.” We met people from other countries and we met black people. I thought there were maybe only white people in London, but no there are also black people. You know what they say that London is the gate of opportunity, that means if you go to London you can go anywhere. Really we have taken lessons from ASAP in London.

Warming up the crowd with traditional dancing and songs!

The event began with joyous singing and dancing, as many things do in South Africa. The children shimmied and shook, while the older ladies ululating voices warmed and relaxed the crowd. Priscilla Higham gave a warm and inviting speech, explaining the organizations history and implementation of the ASAP seven year model, as well as exciting new projects, like building drop-in centers with the help of HAPPI, and replicating the ASAP model in 4 new communities in the upcoming year. All of this, and more, can be found in the Annual Report.

The kids snapped a few pictures of their own with disposable cameras!

UK board advisor Melanie Metcalfe gave an impassioned speech with many of the hard-hitting facts that poor South Africans are faced with today. And one of our esteemed guests, Rosemary Motoboli, gave a heartwarming speech of thanks to ASAP for helping to promote sustainability, capacity building, nutrition and psycho-social support. It meant a lot to hear just how much ASAP is doing, right from the horses mouth.

The event was brought to life by two short films—an ASAP film made by documentary film company Move a Mountain, Elizabeth Mckay and Elio Zossi, and the other by a courageous young woman, Jazzy de Lisser, who visited Masupha village with friends Felix Cooper and Kevin Kollenda and filmed her experience. Both videos created powerful visuals and emotional context for our mission, and a peek into some of the lives we are striving to improve. Understanding what these strong, growing communities have been through and the goals they are working toward is mind blowing, devastating, and incredibly inspiring. As you can see, the event was a huge success and an unforgettable experience. A huge thanks to everyone involved for their hard work, especially Camilla Lowther as a brilliant Chair, the ASAP Advisory Board for putting the event together and Camilla Corbett for running the show. To Rosie and Tony Bartlett, thank you for having us all in your home again and again.

We are very appreciative for the second year generous donations from Julian Metcalfe, through Itsu and Pret a Manger, with such a delicious spread and Adam Bolton for the beautiful flowers. To the Louise T Blouin gallery, I hope you will have us again.

We hope that those in attendance found the singing, dancing, speeches, and videos to be an inspiration, and we encourage you to pass on the information to anyone interested in becoming a part of ASAP’s growing support www.africansolutions.org

Thank you, and please join us in 2012 for the next fundraiser!

Jazzy de Lisser & Felix Cooper with the kids from Mamohau.